Our guest today is Scot Noel, editor and publisher of DreamForge, a print and digital magazine of science fiction and fantasy, set to publish its 6th issue in July, 2020. DreamForge’s general theme is hope and the triumph of the human spirit. As a writer, Scot has faced many challenges, and our guest post today is about his most recent one— creating a story on deadline from a never before seen illustration.

Using Illustration as a Writing Prompt

As you may have noticed, COVID-19 came along in March and disrupted the world. One thing it did not do, as we hustled to keep our digital marketing business going, learn to work remotely from home, apply for payroll protection, and all the rest, was give us more time to work on the magazine.

When it came to that, I hadn’t picked a cover story yet, and we weren’t going to have time to read for one.

At the same time, one of our favorite illustrators, Elizabeth Leggett, asked me if we had any work for her in Issue #6. It was a reasonable query—since Issue #1, Elizabeth has not only proven herself as one of our most reliable and talented illustrators, she’s stepped in on a couple emergencies when other plans fell through and we needed a fast turnaround. She’s been in every issue now, and we were certainly looking forward to her contributions in Issue # 6. But I didn’t have a story that was right for her, yet.

“You’re a Hugo Award Winning Illustrator and we haven’t had a cover from you. I’d like you to create our cover for Issue # 6, but I don’t know what that is yet, or if we have a story for it. How about this. Look over our covers so far, and you know our general theme of hope and progress. Instead of waiting for a story—think of something. I want some sketches on what you think would be an outstanding cover image for us, something really striking and that will set off this issue.

“Don’t worry about the story; I’ll write one to go with the illustration.”

Elizabeth thought about this and responded with:

“So I have been thinking about the subject of hope and of course it is natural that one thinks about Pandora's box. Well, I was interested in what happened to it after she released all the wickedness and managed to keep hope inside.

I want to do a piece representing the futuristic care takers of the jar. I haven't decided if they grew a tree around it or maybe stone vines or... but I think you get the idea. They have taken it off planet to protect it, but realize that they need to return it to Earth because Earth has started forgetting what it is.”

That sounded good to me, so we told Elizabeth to get started, and very quickly she came through, providing a stunning composition that looks like it’s telling a rich narrative with both science fiction and fantasy elements. Front and center is Pandora’s Box (yes, in Greek Mythology it was more of a vase), a beautiful woman whose hair appears to be floating in zero G, some unusual portals (or portholes), and an even more unusual growth of what appears to be driftwood.

Well… I thought, that’s a terrifying challenge! But I’ve done it before, writing stories to flesh out computer game ideas and even for an illustration contest Jane Lindskold helped us with in 2014.

To start, I asked Elizabeth what was going through her mind when she developed the piece. Her answer:

“So I imagined a group of devoted caretakers were founded after Pandora opened the jar but managed to keep hope inside. They hid it away for thousands of years while they worked to find a way to protect it more effectively. (I keep bouncing back and forth with whether they went deep into the oceans or out to space.) While doing so, they found that the jar had been carved from an ancient sacred tree. They researched and developed the genetic profile of it, but when it grew, it grew as driftwood, devoid of life. I am not sure of all of the ins and outs, but when the driftwood came in contact with the jar itself, it bloomed. So now, they realize that the human race is forgetting hope and they must trust and bring hope back to them.”

Next, I asked Jane Lindskold, our Senior Advisor for help. Serendipity! Her response was “I know WAY too much about Pandora.” She sent me an article by Jane E. Harrison from The Journal of Hellenic Studies, significant portions of which were actually in Greek! We even discussed co-writing the piece, or at least having Jane do her advisor thing and keep me on some reasonable course.

And then life continued to happen.

Dealing with work and family and all the other elements of bringing Issue # 6 together kept popping up between me and getting a start on the story, which I originally called “Hope in the Time of the Big Rip.”

If you don’t know, the “Big Rip” is currently one of the leading theories for how the universe ends. The fabric of space-time is not only expanding due to the effects of dark energy, that expansion is accelerating. Eventually, the universe will just kind of “evaporate” as the fundamental elements of existence, atomic matter itself, loses cohesion. Even before that, the gravity holding galaxies together and planets in their orbits will fail.

So, I was drawn to the idea of hope at the end of time. 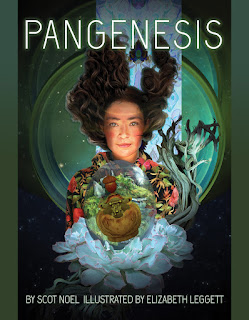 Now, I am also one of those people whose imagination works in the background. Whether it’s while taking a shower or making lunch, some generally unconscious part of my brain pops ideas into existence. They are just suddenly there and demanding attention, like a cat that jumps on your keyboard with the attitude of “look at me now.”

In this case, the line “There never was an age of starships, only the two,” fixed itself as my starting point. Though I thought it would be the first line of the piece, it ended up making its debut deeper in the narrative.

Next, my protagonist, Liv, appeared, literally popping into existence near the orbit of Jupiter to watch the first faster-than-light starship come under attack by terrorists. Was she from a different time? I didn’t know, but she started talking to someone or something named Control, and it seemed like they were playing out some scenario, studying the moment before them.

My brain rebelled at the idea of a time travel story. I love them, but we’ve done several recently. Also, Liv (my protagonist) was clearly not near the end of time. And where was Pandora’s Box?

For me, writing is not a technical exercise of careful planning and then disciplined execution. It’s more like “Huh… I wonder what happens next?” This makes writing as enjoyable for me as reading, because I get drawn into how this story is going to evolve and where it’s going to go in the end.

My next surprise was that Liv—keep in mind she’s alone in a space suit, floating near an unfolding battle—switches to a secure channel and starts talking to another unseen entity named Mem, and they are obviously in some sort of a conspiracy against Control.

As Liv watches the starship Xuanzang being torn apart by high energy lasers, she positions herself to catch an object tumbling toward her along with a field of dangerous debris. It’s a Box. (And now Pandora’s Box has entered the story.)

The scene evaporates and Liv wakes up floating in the cabin of a space yacht. The Box is with her. There is plague onboard, and Act 2 is off and running.

By this time, I can tell I’m writing a very long story. My wife—DF’s layout artist—tells me I have exactly 10,000 words of space. Oh crap, that might not be enough to finish Act 2!

My story problems keep mounting. Time is going by and I’m running up on a deadline with either no coherent story or finding myself halfway through a novel. By late May, early June, it’s way past the time I can effectively co-write with Jane Lindskold. That kind of co-op takes a lot of time. Also, what I have on paper is so weird that I can’t imagine any reaction from Jane other than “What?  Like, seriously, what am I supposed to do here?”

My response would have to have been something like, “Okay, so you know how the faster than light time paradox means you leave in a space ship approaching the speed of light, and when you come back you’re still young, but the people you’ve left behind have grown old? Well, let’s take the other perspective. You’re on a spaceship approaching the speed of light and the universe evolves quickly around you. Maybe it doesn’t evolve in the way you think it should. The future becomes abhorrent, not because of dystopian social issues, but because the future of even a hundred thousand years is as incomprehensible to us as bringing a Cro-Magnon hunter forward to a city like Tokyo or New York.

“Now, what if our protagonist has a chance to move things—even create a new universe—in the way she thinks it should have gone?”

To which the answer would undoubtedly have been: “Again… what?”

Most of the real work of writing the story happened in two weekends at the beginning of June. I raced through two Acts and realized I would need a third to bring it all together. I learned about Kardashev level civilizations. We’re approaching a level 1 civilization— using the equivalent of all the power available to our home planet. Level 2 uses the power of its home star system. Level 3 its galaxy. A hypothetical Level 4 would command the universe, and beyond that Level 5 civilizations control collections of universes. Control became the avatar of a Level 4 civilization, heading toward Level 5.

Pandora’s Box evolved from a kind of Black Box to a data recorder capturing the essence of human experience at various levels of civilization, and from there to a piece of instrumentality, not dissimilar in its own era from a computer screen or phone icon we would click today—that is, something which looks like an image of a familiar object, but when touched calls upon the vast instrumentality of its age.

The driftwood in Elizabeth’s drawing became “directed matter” in the story, a super advanced kind of nano-technology. Her star filled portholes became “pocket universes” called Builds. The lotus flower found duty as a teleportation pad for the Box.

The story veered away from the legend of Pandora and then back again. The motivations and the distinction between protagonist and antagonist blurred, switched sides, and then came together empathetically at the end. After all, Hope must not be forgotten.

Then it was deadline and the content went over to layout. Except for a little tweak. And another one. And a few more little things I worry about still.

The lesson? If you’re not good at detailed planning and fleshing a story out to meet a goal, maybe you would enjoy starting with a prompt and problem solving to the end. I know I do. That idea of the terrifying challenge is much the same as a rollercoaster or whitewater rafting. You just have to move forward and keep from falling out or capsizing. Scream along the way.

When the bad guy in your own story looks at you and says “the purpose of power is to protect the weak. The purpose of knowledge is to elevate others.”  It’s OK to say WTF! and take a step back to figure out what just happened.

Of course, none of this means the story will work in the reader’s mind. That’s the next dread, the twin terrors of criticism and rejection. But that’s okay. I already had my fun.