"And what will you pay for the crown,
little princeling? Gold? Men? A song?"

From Interregnum, The Sign of the Dragon, Mary Soon Lee

I write both poetry and fiction. Viewed as separate activities -- wearing either my poetry hat or my fiction hat -- I have little to add to the voluminous advice already out there. But I do have thoughts about what happens if you try to jam both hats on your head at once. In particular, I have thoughts about the unwise practice of writing book-length, hard-to-market, epic narrative poetry.

Firstly, be careful. If you dabble in poetry at all, there's a risk you will succumb. Back in 2013, I wrote a standalone fantasy poem about a boy chosen by a dragon to be king. At least, I'd intended it to be a standalone poem. Nearly four years and 340 poems later, I completed a full draft of "The Sign of the Dragon."  It was the hardest, most addictive, most all-absorbing work I've ever attempted.

In 2013, I had young children. I was writing poetry because I could squash a poem into a short space of time, then set it aside and concentrate on being a stay-at-home parent. The trouble began when I found myself thinking about the boy in that first poem, about what happened next. Poem by poem, I kept returning and expanding King Xau's story.

This brings me to my second observation about epic narrative poetry. There's a breathtaking freedom to it. If you decide to tell a story by means of many individual poems, you can then switch style, length, point of view. You can dart from a poem about the hero near the beginning of the story, to a poem in the middle from the perspective of his elderly cleaning woman. You can choose to skip over major battles altogether, or to show them in separate glimpses from assorted characters: soldiers, generals, stableboys, women accompanying the army.

Poem by poem, you can tell an epic piecemeal, each poem a tile in the final mosaic. Many of the oldest stories we have come from an oral tradition of narrative poetry, though they may be essentially a single long poem. I would have found it hard to tell my story in one piece. But by breaking the story down into self-contained poems, I was able to juggle parenting and writing an epic. Not only was this a convenient form for me, it was also liberating. I could return to an earlier point in the story to add an arc about another character in a handful of poems. I could slip into rhyme, or tell a scene in the dialogue format of a play, yet not be constrained to maintain that form throughout.

Thirdly, I have a few tips that helped me during the process of writing "The Sign of the Dragon." Since every writer works in different ways, even if you decide (unwisely!) to write epic narrative poetry, these may or may not be useful to you. Although I darted about in the story as I wrote, I wanted the narrative as a whole to be consistent. I found it especially helpful to jot down the date that each poem took place, even though these dates are omitted from the final book. Noting down dates let me check such things as the season, the phase of the moon, the age of the king's children, how long it would take to a character to travel from one place to another.

Similarly, I sketched a map to show the different countries and cities. It was not a beautiful map, quite the opposite. But it was enough for me to gauge distances and to know whether a city lay to the north or east of another city. I kept many other notes common for novelists: notes on character backstories, on the fictional history, on the nature of my fictional dragons and monsters, etc.

Among those notes, I kept one set of records that ties in more closely to poetry: a record of repeated phrases or tags. For instance, I adopted the following tag for one of the enemy kings: "the Red King: red-haired, red-handed in war." Sometimes I would include the full phrase, sometimes just a part ("red-handed in war"). This type of device is ancient. Homer uses such epithets as swift-footed Achilles, rosy-fingered dawn, and the wine-dark sea. Epithets can remind readers of which character is which; they can call back to earlier moments in the story in a few words; they can provide common rhythms or linkage between different poems. If I had understood the scope of what I was writing from the outset, I think I would have used epithets more systematically and more extensively.

Fourthly and unsurprisingly, I also ended up doing research. Although "The Sign of the Dragon" takes place in an imaginary secondary world, it draws on elements from ours. So I found myself researching ancient China and the Mongols, along with sundry items from foaling to archery. For poets, I recommend picture books in addition to drier reference works. The single book I returned to most often was an illustrated children's book: "Ancient China" by Arthur Cotterell, part of the Eyewitness Books series. Images are highly evocative, conjuring an atmosphere, a sense of time and place, whether or not you include specific details from them. For illustrated military references, Osprey Publishing offers short books on topics ranging from "Siege Engines of the Far East" to "Pictish Warrior AD 297-841," and I am indebted to a friend, Timons Esaias, for introducing me to this resource.

Fifthly, I should caution you that writing epic narrative poetry may be a poor career choice. My agent (Lisa Rodgers, JABberwocky Literary Agency) received a series of rejections for "The Sign of the Dragon," several saying they loved the book but didn't publish poetry, others saying they loved it but didn't publish fantasy. When the COVID-19 pandemic broke, I very much wanted King Xau's story to be published, so we released an ebook version, with a print edition forthcoming in 2021.

Lastly, unwise or not, commercial or not, I have never written anything that matters as much to me as "The Sign of the Dragon."  I love it fiercely, protectively. Sometimes, writers should be unwise.

Mary Soon Lee was born and raised in London, but now lives in Pittsburgh. She writes both fiction and poetry, and has won the Rhysling Award and the Elgin Award. Her two latest books are from opposite ends of the poetry spectrum: "Elemental Haiku,"containing haiku for each element of the periodic table (Ten Speed Press, 2019) and "The Sign of the Dragon,"  an epic fantasy with Chinese elements (JABberwocky Literary Agency, 2020). After twenty-five years, her website has finally been updated: marysoonlee.com.

Buy links for the The Sign of the Dragon: 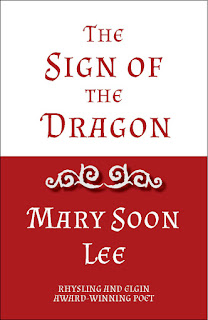